It is available to all Twingate customers and does not require any additional deployment for existing customers and is completely transparent to end users and administrators.

Let's take a look at the flow a Client follows to establish connection to a Resource via a Connector:

On initial startup, both the Twingate Client and Twingate Connector initiate and establish an authenticated connection to a central service that is publicly accessible (Twingate's Relay Infrastructure available globally).

The initial role of this service is to establish a signaling channel for the exchange of peer candidate addresses to each peer.

For the client to negotiate a peer-to-peer connection with a connector, both peers must discover their public IP:port address assigned by the NAT layer. (A STUN server facilitates this process and is hosted within Twingate's relay infrastructure.)

The peer candidate addresses are used by the partner peer to attempt to establish a direct peer-to-peer connection and complete the NAT traversal process.

It is not always possible to establish a direct peer-to-peer connection due to various reasons from
blocked ports to incompatible NAT layers. In those cases, a backup data transport method needs
to be maintained.

In Twingate’s case, this is a data relay infrastructure that operates in the transport layer of our network architecture. Relays have public addresses and are available across the globe, therefore they are always accessible from clients and deployed connectors, serving as a reliable backup transport method.

here is what you should keep in mind about Peer to Peer in Twingate:

If you are interested in the technical details on how Peer to Peer is implemented, read on:

User space network stack implementations like QUIC can evolve more quickly than their kernel space counterparts, and we’re excited to participate in this fast-paced evolution.

The head of line blocking problem occurs when all HTTP/2 streams multiplexed over a single TCP connection are impacted by retransmission due to packet loss affecting only a subset of streams.

QUIC is built on top of UDP, which is an unreliable network protocol, and so it provides its own reliable delivery mechanisms. QUIC provides reliable and ordered delivery of multiple concurrent data streams by multiplexing them over a single connection. 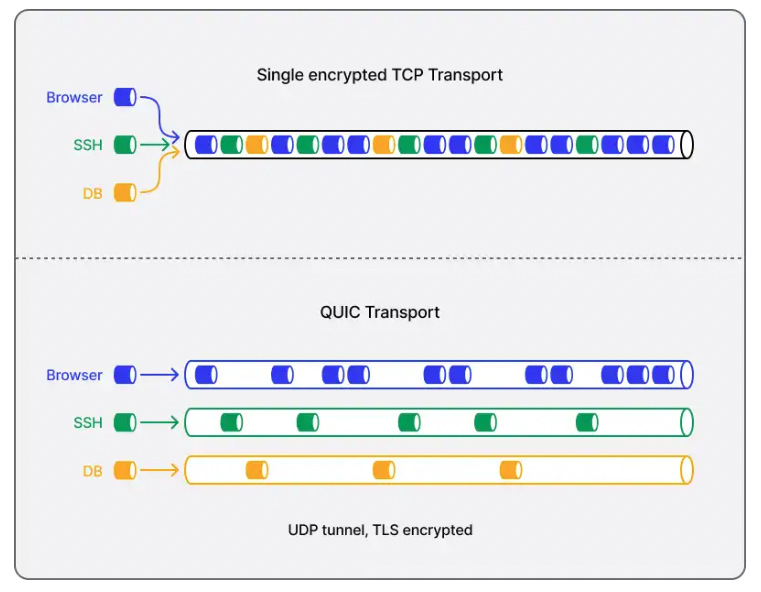 Although TCP implementations have been highly optimized over many years, for many users and use cases, QUIC’s low latency is arguably more critical than raw throughput, and QUIC can match or exceed TCP+TLS in this respect. Thanks to QUIC’s adoption, there are also ongoing efforts to optimize UDP performance in the Linux kernel, which will further improve performance in the future.

The motivation behind the development of QUIC—to improve the throughput of multiple streams on a single reliable connection—is also valuable to maximizing throughput from the Twingate client to multiple private resources. Although QUIC was envisioned to optimize the throughput of multiple streams for a single application (e.g., your browser), Twingate extends this concept by mapping individual data flows from any number of applications to single QUIC streams and delivering those data flows to connectors and resources deployed anywhere in our distributed architecture.

Faster connection establishment: The initial connection takes a single round trip between client and server. Connection resumption can also be done without any additional round-trip negotiation.

Support for the latest cryptographic protocols: QUIC only supports TLS 1.3 and later, and introduces additional security into the encrypted channel.

Client-side roaming: QUIC connections survive client-side IP and port changes—for example, due to NAT rebinding or a user switching between networks—which not only results in a better experience for users but is also better suited for today’s mobile work environment.

Incorporates best practices from TCP: Although QUIC is a UDP-based protocol, it contains the best practices learned over the long history of the TCP protocol without being restricted by TCP’s legacy (e.g., packet format). For example, QUIC is usually more efficient than TCP in dealing with packet loss recovery.

Updated about 2 months ago

Did this page help you?